How to Add Protection when Switching Inductive Loads – 8501088

The importance of adding protection to the load terminals in inductive load switching: a review of important inductor behaviors.

Acromag manufactures products that are often used to switch inductive loads. For example, our digital outputs and alarm relays commonly drive inductive loads that include motor windings, solenoids, interposing relay coils, physical inductors, and even the load wiring itself. In all cases, we routinely recommend that protection be placed local to the inductive load being switched. For DC inductive loads, this usually takes the form of an added reverse-biased shunt diode placed right across the load terminals. We make this recommendation even when our switches may already incorporate similar protection inside the device. Often, we’re asked to justify the “inconvenience” of adding protection to the load by customers and some have even inferred that our switching devices must be weak because we make this recommendation. However, this is not an “Acromag thing,” but good practice for all inductive load switching applications.

The purpose of this application note is to explain the importance of this added protection and how it works.

To help you understand why you should add this protection, we need to review some points about inductor behavior. You might have been told things such as; “…the current through an inductor cannot change instantaneously,” or “…inductors impede changes in current flow,” and “…inductors store energy.” The current in an inductor cannot change instantly; thus inductors will impede changes in current, and do indeed store energy. The stored energy in a charged inductor is not indefinite; its eventual discharge is precisely why you need to add protection to switched inductive load circuits. This is illustrated by the RL charging and discharging circuits shown in the tech note.

Download How to Add Protection when Switching Inductive Loads by clicking the link at the bottom of the page. 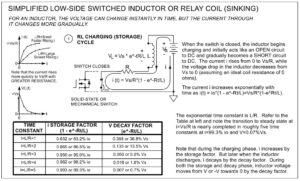 Use the link at the bottom of the page to download How to Add Protection when Switching Inductive Loads.

White Paper: Why Do I Need Electrical Isolation?

Stay up to date with Acromag