Inside a Multiple Channel Analog to Digital Converter

We will look at a common technique to implement A/D conversion in a Commercial Off-The-Shelf (COTS) board. The information is helpful in determining how to wire a system with multiple A/D sources. 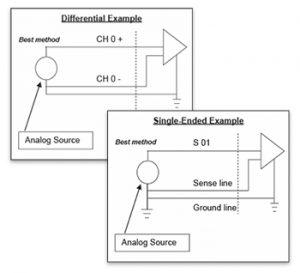 A/D Sampling Techniques
Multiplexing Inputs
A very cost-effective way to implement an A/D conversion board is to use a single A/D converter component (ADC) and multiplex different combinations of signals to the ADC’s input. This technique can accommodate a large number of inputs. The signals can be single-ended or differential inputs to the board, internally-derived calibration voltages, or a local common reference referred to as “SENSE” in the drawings in the pdf.

The trade-off on this approach is cost vs. speed. The ADC may be quite fast, but the actual speed per channel is reduced in proportion to the number of points being multiplexed. In the case of Acromag’s PMC330, the ADC samples at 125 KHz, but multiplexing 32 channels results in a throughput of about 4KHz for individual channels.

Simultaneous A/D Conversion
The alternative to multiplexing inputs into a single ADC is to have multiple converters on a board, each dedicated to a single input line. This approach is followed when the user wants a “snapshot in time” of the values on multiple inputs. However, in order to preserve simultaneity, it is necessary to convert and store the values temporarily until the host computer can transfer them across the bus to working memory where they can be processed. As an example, Acromag’s PMC341 has a “sample-and-hold” front-end and is able to perform 8 simultaneous conversions then store the values temporarily. Augmented with two 512-sample FIFO buffers, the PMC341 can record multiple simultaneous samples
while waiting for the host computer to transfer the data.

The multiple converter approach is a bit more costly than the multiplexing approach. Real estate on the board is the limiting factor, since most compact COTS form-factors (i.e. PMC, PCI, IP, and cPCI) only allow mounting of a limited number of components. Consequently, there are typically fewer channels on boards with multiple ADCs than on boards multiplexing to a single ADC. The benefit is simultaneous data conversions at higher potential sampling rates.

Wiring Techniques
Differential wiring is recommended when the analog source is not close enough to the chassis (containing the A/D converter) to confidently create a common stable ground plane. The source signal is wired to the channel input “+” and the reference ground is wired to channel input “–” of the A/D board.

In single-ended mode, there must be a stable common ground plane for both the system chassis and the A/D source which is wired to the common A/D reference called “SENSE’ in the examples in the pdf. It is also helpful for the designer to understand what happens to the signals inside the A/D board both during and in between conversions. Knowing how a channel’s signal is handled when another channel is switched to the ADC can be very important.

Differential A/D Inputs
Example 1 below demonstrates the generally recommended setup. Here, the multiplexer effectively uses the differential signal from the external source to create a common mode on the local board. The input to the board’s ADC is actually single-ended and referenced to the local board common which has been normalized with the common mode of the input signal source. Note that external inputs to the first stage multiplexers are all open except for the input and reference of the signal being converted. System designers should be aware that both the “+” and the “–” input lines will float for every channel except when that channel is selected.

Single-Ended A/D Inputs
Example 2 represents the switching that occurs in a board such as Acromag’s PMC330 when it is configured for single-ended mode. It is not surprising that the signal to be converted is referenced to the “SENSE” line. In cases where the source is very close to the A/D board and the electronics are tightly coupled, SENSE connects to the system common ground. The actual ADC is also referenced to system ground and, at very short distances, we should see a very stable signal.

Operation during conversion
In both differential and single-ended conversions, the analog value is frozen in time with a sample-and hold circuit when conversion is initiated. In the case of the PMC330, the multiplexer switches to the next channel to be converted while conversion of the previous channel is taking place. The implication of this operation is that the input “+” and the reference “–” in differential mode, or the single-ended input in single-ended mode, return to float state before conversion completes if the next conversion is another channel.

The two levels of multiplexing also allow us to select between externally generated “real world” input signals and internally generated reference and calibration voltages. It also allows some flexibility in selecting the input voltage range. In fact, even boards employing simultaneous A/D conversion and multiple ADCs, make use of some internal multiplexing, at least for calibration purposes.

Example 3 below shows the grounding strategy for a single channel. It is highly recommended that unused inputs are tied to system ground.