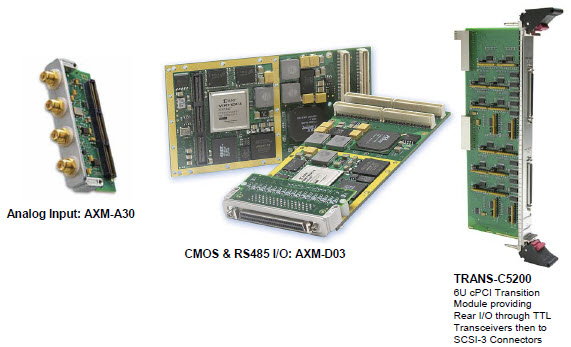 However, to maximize savings when FPGAs are used to perform custom I/O functions, it is very important to first determine the suitability of a particular FPGA module for the application.

This determination is dependent upon several factors:

Acromag offers a broad family of FPGA modules to address the concerns of size and performance. But for this article, our discussion will focus on meeting the I/O interface requirements.

After selecting an FPGA module of sufficient resources, it is the I/O interface requirement that will determine whether the platform will solve the application at hand. As FPGA modules are more frequently used to build bridges between various sub-systems, it is necessary for an FPGA Analog Input: AXM-A30 TRANS-C5200 6U cPCI Transition Module providing Rear I/O through TTL Transceivers then to SCSI-3 Connectors CMOS & RS485 I/O: AXM-D03 module to quickly and easily adapt to the sub-system’s I/O interface requirements. Based upon experience in FPGA module applications, Acromag offers several standardized methods to customize the front and rear I/O interface on many of their PMC FPGA modules. A

Acromag’s Virtex-4 and Virtex-5 FPGA PMC modules feature both front and rear I/O. See Figure 1 below. Rear I/O consists of 64 I/O points accessible through the PMC JN4 connector. These I/O points are directly interfaced to the FPGA device and offer the configurability defined by the constraints file of the FPGA. Definable I/O types include: LVTTL, LVCMOS, LVDS, ELVDS, and Hyper-transport. Typically, rear I/O points are routed to the backplane. They are then routed through the backplane connector and can be used either directly as configured or further routed to a rear transition module (RTM) where additional signal conditioning may occur.