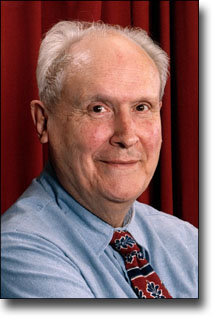 A key figure in the development of signal conditioning technology, Henry W. Patton II, founder and President/CEO of Acromag, Incorporated died on July 23, 2003. Friends and family joined together to mark his passing with deep sadness in honoring their well-respected colleague.

Mr. Patton pioneered the use of magnetic amplifiers for process measurement applications. As a young engineer at Collins Radio in Cedar Rapids, IA, Mr. Patton realized the mag-amp’s potential for measuring low-level sensor signals and founded Acromag, Inc. in 1957 in Detroit, MI. He selected the name Acromag as a derivative of accurate magnetics and the Greek word “acros” meaning high or upper. Mr. Patton was very successful in adapting the mag-amp for use in early process transmitters and metal sorting devices. In fact, his early 1960s design for a thermoelectric metal tester is still being manufactured at Acromag today for use in the aircraft industry.

As transistors became available, Mr. Patton adapted the technology for use in signal conditioning applications. Under Mr. Patton’s leadership and engineering expertise, Acromag grew quickly into a multi-million dollar international corporation, relocating to Wixom, MI in 1965. He was still active as President, CEO, and Chairman of the Board until his recent illness.

Mr. Patton was a long time member of the Instrumentation Society of America and recently served as treasurer for the local Detroit chapter. He was also a strong supporter of the University of Michigan-Dearborn’s College of Engineering program. This past May, he received the Distinguished Cooperative Education Program Advocate award from the university.

An avid photographer and classical music lover, Mr. Patton collected cameras and pianos. He kept his prized Steinway concert grand piano in the Acromag facility where he often hosted meetings for the local chapter of the Piano Tuner’s Guild.

Mr. Patton is survived by his brother David Patton and his Acromag family.